HelloGreedo is an all-things Star Wars YouTube Channel. The channel contains video reviews, Star Wars parody, and is primarily known for its series of ‘Changes’ videos that outline the special edition changes found within the original Star Wars trilogy. As of January 2018, the channel has over 200,000 subscribers and more than 35-million total video views. HelloGreedo has grown into a thriving community. Fans have created action/lego figures, fan fiction, and artwork for the character of HelloGreedo. Over the years, the quality of video production has increased dramatically. A green screen is now utilized, better effects have been implemented, and the audio quality has drastically improved. With the announcement of Star Wars Episode VII, HelloGreedo’s options for video topics are seemingly endless. HelloGreedo has an unflinching appreciation for his viewers and fans. He attempts to correspond with everyone who communicates with him on the numerous social media outlets he is a part of. Subscribe today!

Origin Story: Why the Name ‘HelloGreedo’?

In 2005 I purchased a Don Post Greedo mask on Ebay, and wore it to the midnight premier of Star Wars Episode III: Revenge of the Sith. Wearing coveralls, an orange vest, and holstering a homemade blaster made out of plumbing parts and a modified Nerf gun, I walked into the theater with my friend who was dressed as Han Solo. In a nerd-rush, we marched into the theater full of excitement and anticipation. 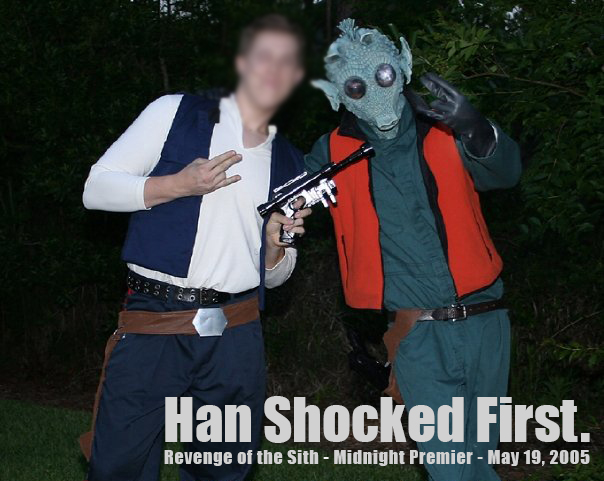 I enlisted into the United States Navy in 2007. After boot camp, the Greedo mask came out once again. In a fit of post-boot camp boredom, I put the mask on, and at the suggestion of a friend, logged onto a website called JustinTV. JustinTV is a platform for people to broadcast via their webcams, similar to Ustream. I would log on, rant and rave, scream and yell, and say the most ridiculous things I could think of. I’d often have more than 300 viewers at a time. A few days after doing this, I got the idea to create a YouTube channel. The HelloGreedo channel was officially created in 2007, and sat idle and undisturbed until 2011 when I uploaded my first video.

Due to the fact that I now wear a Stormtrooper helmet, I am often asked why I use the name HelloGreedo. I wore the Greedo mask for the first year, but the mask had been in a hot Florida attic for such a long time and was on its last leg. Numerous holes were rotting through the rubber, the plastic bubble-eyes were dented, and the mask crumbled more and more every time I put it on. It was time for a change. It was time for something more iconic and sturdy. I purchased an eFX ANH Stunt helmet, and began wearing it in my videos. I later purchased a full set of screen-accurate Stormtrooper armor, made from the original movie molds. It was an extremely long process, but after a year of waiting, cutting, gluing and snapping, I completed my set of screen accurate ANH stunt Stormtrooper armor. HelloGreedo took his first step into a larger world.

I can’t say thank you enough to all of my subscribers, viewers, and supporters. The outpouring of kind words and encouragement is more than I could have ever imagined. Whether a comment is positive or negative, I appreciate them equally. The most important thing to me is that people are talking about Star Wars, and all of the discussions/debates that I see on a daily basis due to my content is such a joy.

Thanks again, everyone. HelloGreedo, out. 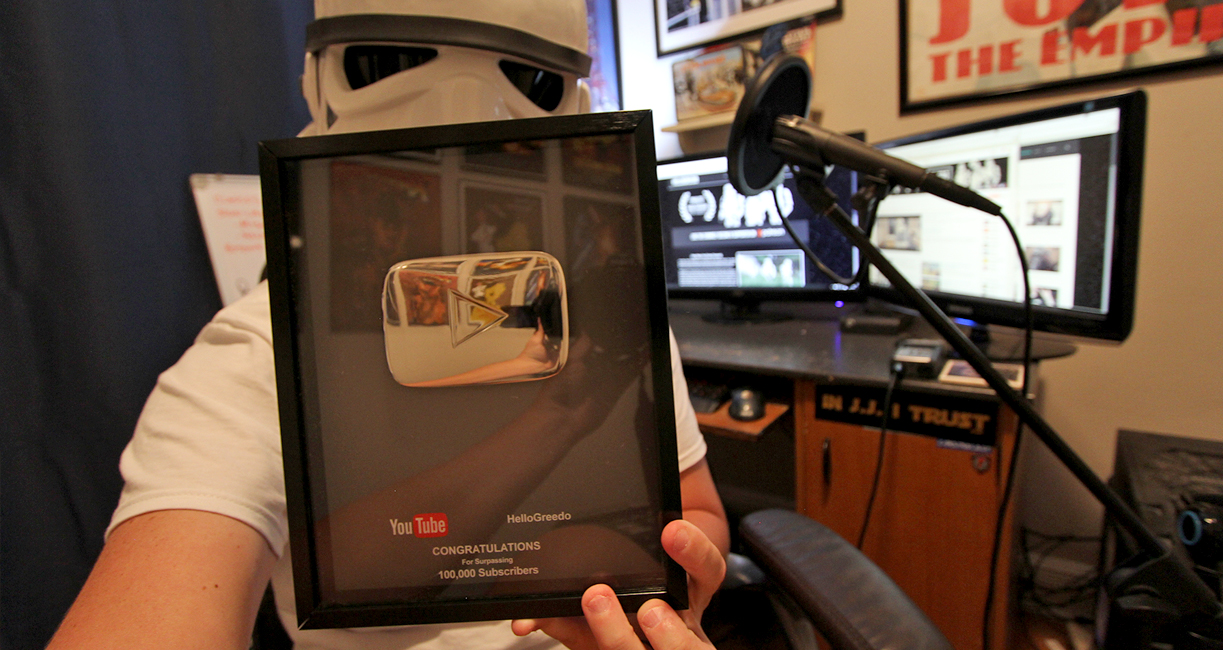