We don’t live in bubbles of seclusion, or information-blocking castles surrounded by a stagnant moat of uninfluenced thoughts. Isaac Newton hit the nail on the head, we all stand on the shoulders of giants. Whether that giant is a globally known and admired film director, or your friend who comes up with a clever idea that you then run with. Influence surrounds us and penetrates us; it binds the galaxy together. That’s not to say that you can’t have an original thought, but generally the flame that sparks an idea is rooted in an experience, an individual, or an event happening somewhere on planet Earth. Even the inspiration to write this entry came from an outside source. That source would be James Rolfe. Some of you may know him better as The Angry Video Game Nerd (AVGN). James is turning his beloved web series into a full length feature film. This is an incredible feat, and one that should be admired by not only lovers of movies and games, but by anyone who has ever had a dream to tackle a creative project.

If you haven’t taken the time to research the Angry Video Game Nerd Movie, be sure to watch the video on the right. The heart and soul that is being poured into James’s project is incredible, and if his story doesn’t inspire you to pick up a camera, brush, or a pen, I don’t know what will. As you can already guess, I’m a huge fan of The Nerd. I’ve probably been watching his videos, on and off, for nearly a decade. I recently received a message from a HelloGreedo viewer mentioning that I used a line from an AVGN video in my Star Wars Holiday Special review. I didn’t realize this, and at first I didn’t believe him. I then proceeded to sift through old AVGN videos to find the exact phrase I was being accused of using. I found it. Of course me using his phrase wasn’t on purpose, it was a simple mind-slip. A case of a hearing something years ago, and using it without putting two-and-two together or remembering the source. A drawer of thoughts from the past being opened, and a memory slipping through the cracks. This sort of thing happens in comedy, speeches, and even in visual mediums such as film or photography. So, I cheers a Rolling Rock to you James. Sorry about that one buddy. I promise it won’t happen again.

I have had correspondence with HelloGreedo viewers who say that my YouTube channel inspired them to pursue a creative project. That is an incredibly humbling thought. The idea that something I am so passionate about was the spark that aided someone in their pursuit, simply put, is an amazing feeling. Sure, HelloGreedo started as just a man. An individual. One guy with a camera and a voice. But just as HelloGreedo has grown up, so have I. HelloGreedo has become a symbol (at least in my mind) for the pursuit of enjoyment. It’s so much bigger than just another Star Wars YouTube Channel. It is the idea that, in the year 2014, you don’t need a studio. You don’t need a label. You don’t need a publisher. There is no reason you shouldn’t pursue your art.

So, I raise a big snifter of scotch to everyone who ever had an influence on me. From my dad helping me film stop-motion movies with Jurassic Park action figures, to the big man Lucas himself. Everyone who has ever helped me with a HelloGreedo video, whether in filming or simply juggling ideas, thank you. Inspiring an artist is one of the easiest things you can do. So, do your good deed for the day, tell someone you know that you dig what they’re doing. Tell them to keep it up, and press on. Tell them to continue developing their music, or make that indie film they’ve been talking about for years. Tell them to open an Etsy store and start selling their paintings. Inspire him to start a Star Wars YouTube channel, and grow a fan base that ends up inspiring him. 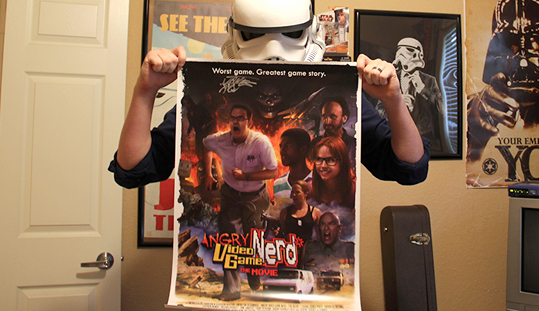 Photos taken by The National seem to reveal what most of us have suspected, the desert planet Tatooine will make an appearance in Star Wars Episode VII. With Disney’s secrecy surrounding every aspect of the new film, these images seem to only serve to tease and draw more speculation from fans. The rumored set photos were taken in Abu Dhabi near the Qasr Al Sarab resort. Crew members can be seen moving what appear to be set pieces into a large tent, which one can only speculate to be used for ensuring that details from the production remain a secret. 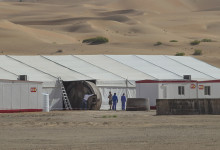 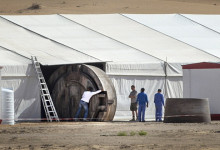 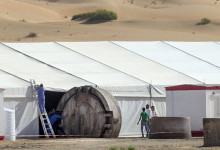 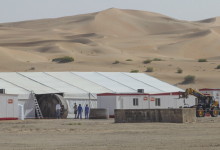 What do these photos tell us? Not much. Nothing really important. Are they exciting? Sure. They are some of the first images to show the production of one of the world’s most beloved franchises. These photos of have been analyzed by internet detectives, and the running consensus seems to be that the large circular object being hauled into the tent is an AT-AT foot. Is this a stretch? Absolutely. Could these two objects be anything? Yep! You can rest assured that every single piece of leaked material from Episode VII will be analyzed and scrutinized until December 18, 2015. What do we know? We know that Star Wars Episode VII has, or is days away from, the start of filming. It’s completely possible that these practical set pieces will be used as the foot of an AT-AT, and the body of the AT-AT will be digitally added (similar to some of the Tyrannosaurus Rex scenes in Jurassic Park).

We’ve never seen an AT-AT on Tatooine, so it will be interesting to see those giant metal beasts clumsily stepping across the desert. Another question is, do you want to see these leaked photos? A part of me wants to avert my eyes and look away. It’s incredibly early in the production, but do you consider these leaked images spoilers? 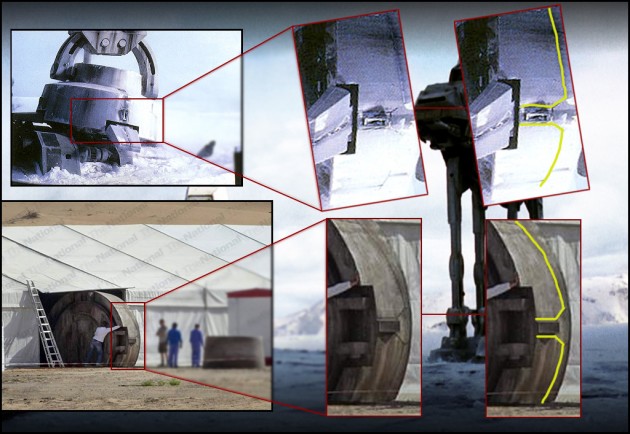